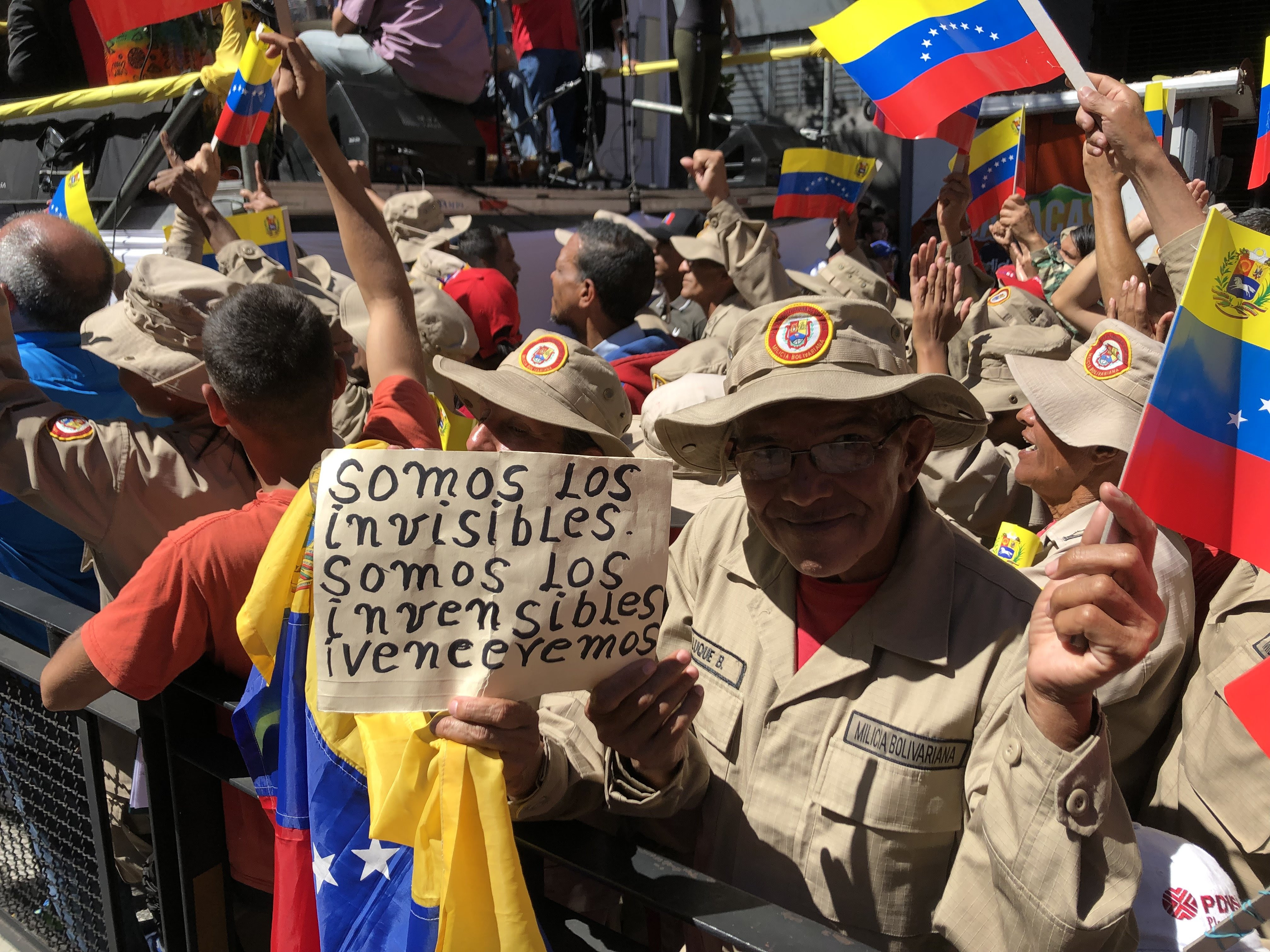 Silence is Betrayal: Hands Off Venezuela!

In Solidarity with Venezuelan Self-Determination,

Though we are a youth-led organization, many of us remember the buildup to the Iraq War all too well. In 2003, under recurring claims of “weapons of mass destruction” and the need to “bring democracy” against tyranny, Republican and Democratic politicians alike, with the aid of mainstream corporate media outlets, built up the justification for war, premised on numerous outright lies. Nearly 500,000 Iraqis have been killed since the U.S. first invaded in 2003. There remain some parts of Iraq, destroyed by the war, that were never rebuilt.

In a 2017 assessment, the Congressional Budget Office calculated that the wars in Iraq and Afghanistan have cost U.S. taxpayers nearly $2.4 trillion. To put that amount in perspective, at the cost of tuition in 2012, every admitted student in the United States could have received a free public college education—40 times over. Thousands upon thousands of hospitals could have been built, millions upon millions of homes. $2.4 Trillion is also the amount cited by the UN that globally needs to be invested in clean energy annually through 2035 to reduce the catastrophic impacts of climate change. When we are talking about the money that has been stolen from U.S. workers for endless war and military intervention we are talking about clean water, and classrooms, we are talking about life and death, and the security of our families, here and abroad.

In 2019, U.S. politicians set their eyes on a new site for intervention: Venezuela. Yet again, the media and elected officials fixate on Maduro’s political unpopularity and errors. However, question of U.S. intervention is not really about Maduro, and it is never really about building democracy or attending to the needs of the people, it is about U.S. imperialism, which is a method of expanding and maintaining the economic interests of the few through political dominance and manipulation. For example, the United States continues to maintain close ties to Saudi Arabia—a country responsible for creating potentially the greatest humanitarian crisis in contemporary world history: in Yemen, where 13 million people face famine, and an estimated 85,000 children under the age of 5 have died of starvation. The U.S. remains the largest arms supplier to Saudi Arabia by far.  So, this becomes a question of why and when the U.S. intervenes abroad. If Iraq is only one example of the kind of apocalyptic devastation that U.S. military intervention brings, what can we say about Chile?

In 1970, under the direction of President Nixon and his National Security Adviser, Henry Kissinger, the CIA spent millions of dollars to begin Project FUBELT – with the intention of destabilizing Chile to undermine the newly elected socialist president Salvador Allende. Notably, in CIA notes, Nixon and Kissinger admitted they wanted to “make the economy scream.” When Chilean president Allende nationalized the copper industry, private corporations in the United States pressed action. Three years later, on September 11, 1973, Allende was forcibly removed from office and took his life the same day. This coup paved the way for the brutal fascist dictatorship of Augusto Pinochet who killed, detained, and tortured thousands of Chileans while in power. Yet again, history teaches us it is not brutality that the U.S. government is invested in preventing—it is threatened by shared prosperity.

It is without question, the Venezuelan economy has suffered immensely in the last few years due to the dramatically falling price of oil in the global market. Like many other former colonized territories, the Venezuelan economy relies on a single commodity, theirs being oil. When Trump sanctions took effect in 2017, the already struggling economy went into free-fall. This economic fluctuation is well documented. Trump sanctions amount to economic warfare. Venezuela has lost billions in just the two years since Trump's sanctions took effect, and currently, the U.S. has frozen billions more dollars in Venezuelan bank accounts and assets in the U.S. and abroad.

This violence cannot be emphasized enough: these billions of dollars in stolen and frozen assets translate into food shortages, urgent medicine undelivered —the most essential necessities needed for people in Venezuela to live. Offering small gestures of “aid,” while simultaneously stealing a country's resources and systematically destabilizing their economy, is a breathtaking performance of cruelty and hypocrisy.

In 1998 Hugo Chávez was elected as the President of Venezuela and ushered in a set of popular social programs as part of what many call The Bolivarian Revolution. These many social programs and innovative models of grassroots democracy, such as the communes, are representative of aspirations that many of us are trying to enact here in the U.S for more equitable, democratic, and healthy communities: from nationalized healthcare and childcare, to accessible food, housing, and public education. While many of the most progressive elected officials in the U.S. are criticizing Venezuela as a failure, Venezuelan leaders have years and years of experience in producing and managing the very programs that progressive Democrats are now framing their legislative agenda around. If we look at the Netherlands and the UK as models for nationalized programs, why do we not hold the same regard for nations in the Global South that do not have the benefits of wealth reaped from decades of colonialism, yet still attempt, and successfully implement, many socialized programs for collective wellbeing?

Weeks after denouncing socialism at his State of the Union Address, Trump has proposed a budget that dramatically slashes Medicaid, food stamps, and meals for poor children, while enlarging the already enormous military budget and funding for a highly unpopular, and unnecessary wall at the border. Our enemy is not Venezuela, and it is certainly not nationalized programs that Venezuela has attempted to implement to encourage equity, fairness, and dignity for all people who live there, even those without access to generational wealth. Our enemy is unmitigated greed and extraction, forced upon us with weapons.

Not only has Venezuelan leadership since the Bolivarian Revolution been steadfast in their solidarity to Palestine and anti-imperialist projects around the world, they have extended considerable aid to Haiti, offered aid to U.S. hurricane victims, and offered free oil to low-income Americans to have heat during the winter.

These right-wing attacks on the people of Venezuela are not confined to Venezuela’s borders, they are attacks on all of us. As our friends at The Red Nation shared on the historic connections between Venezuelan and Haitian self-determination:

The Haitian uprising is directly related to US-backed coup attempt in Venezuela. In 2005, the Bolivarian government under Hugo Chavez integrated Haiti into the Petrocaribe platform, generously donating Haiti billions of dollars for much-needed infrastructure development and subsidizing gas prices—vital resources that the current government under Jovenel Moïse has squandered.

The solidarity economy between the nations stretches back two centuries. In 1815, Simón Bolívar, popularly known as the Liberator of Venezuela, fled to Haiti, receiving protection from the self-emancipated former French slave colony. From Haiti, Bolívar led the successful Venezuelan independence movement from Spain. Moved by the hospitality he received, upon his departure from Haiti Bolívar promised to abolish African slavery as part of the independence movement. He did. The history of solidarity is not forgotten.

If you believe that you, your children, and your communities have a right to self-determination—the right to choose our own destinies, if you believe en el derecho de vivir en paz (the right to live in peace) like Chilean Folk singer and activist Victor Jara said before being assassinated by Pinochet’s regime, part of that aspiration and understanding has to be to care, to fundamentally care about others who are just like you, who live outside of US borders.

They are part of us and we are part of them. There is no Green New Deal or overhaul of healthcare that is possible without a true commitment to divesting from the American war machine, and decades of military infiltration and brutality, against ordinary people trying to build an agenda for their own dignity.

As Dr. King taught us in his steadfast position against the war in Vietnam—loving the people means telling the truth that is unpopular, it means having the courage to set a vision that leaves no one behind.

We are calling upon all people of conscience, join us in pressuring our political leaders to a higher standard of humanity, to lift the violent sanctions on the people of Venezuela immediately. These sanctions are unfounded, morally bankrupt, and cruel. If the sanctions are not lifted, more people in Venezuela will die.

We support our people marching today at the solidarity protest in Washington D.C., and will be joining the March 18 demonstration in Miami. We encourage our supporters to do the same or join other demonstrations and activities across the U.S and internationally to stand with the Venezuelan people against U.S. imperialist threats.

We say: Not another coup in our name! Hands Off Venezuela!